Prof Noakes forwarded me this letter sent to him by Amanda.  The original recipients were her dietician and her partner.  Amanda wrote to them after experiencing dramatically different results on a paleo-styled diet as opposed to the low fat diet they prescribed for her.  It makes for an interesting read…

In 2006 I came to you for dietary advice as I had raised LDL cholesterol.  I was referred by doctor X.  At the time I weighed about 58kg and was skinny.  My triglycerides were excellent and HDL alright at 1.3.  I was advised to avoid foods containing saturated fats and cholesterol and put on a low fat diet.  This is the standard and accepted treatment given to people with raised LDL cholesterol.

What is not obvious is that the diet is also a high carbohydrate diet. When you remove one food group you have to make it up with another and carbohydrates such as whole grains, oats, etc were recommended as healthy options.   I believe that I am one of those people of whom Prof. Tim Noakes talks about when he describes people as being carbohydrate intolerant.  In decreasing my fat intake I increased my intake of carbohydrates as one can expect on this diet.

The weight gain following my adopting the low fat diet was devastating to me but my doctor assumed, as so many people do, that it could not be the heart healthy diet but must be due to menopause or HRT.  In five years I put on 17kg going from skinny to fat, and my blood markers deteriorated.  My triglycerides went from a very healthy 0.70 to an unhealthy 1.6, there was no change in my HDL, and my LDL got worse going from 4.2 to 4.44.  My normal waist line grew to the ‘at risk’ circumference of 89cm as my belly expanded.  I suffered from planter fasciitis, reflux, snoring, constant hunger and the misery of rapid and seemingly uncontrollable weight gain. I had been skinny for the prior 50 years and had always battled to put on weight seemingly being able to eat anything without weight gain.  My diet had always included animal fats.

As my doctor did not consider that the low fat diet was responsible for my deterioration, she responded to my worsening blood markers with my being advised to take statins.  Immediately I started taking what was a low dose of statins I suffered from muscle pain in my arms and aches generally.  After a few months I changed to another statin drug and the pains were only marginally improved.  I continued with the low fat diet.  Eventually I had to visit the physiotherapist regularly as I suffered so severely from shoulder pain, and my hands and wrists were so sore that I could no longer paint.  I started feeling vibrations in my body and arms, especially on waking, and developed a ticking sensation on the left side of the base of the back of my head.   In November 2011 my doctor tested my creatine kinase levels and they were way over the normal range at 420 (the top of the normal range being 150).  I was advised to go off statins and that they were not a good idea for me.  The protein in my blood suggested muscle and nerve damage, or kidney damage.

I decided to try the high fat low carb diet advocated by Tim Noakes.  I visited him after the first three months and then again three months later.  The change in my body was extraordinary as the weight disappeared from around my chin and my belly.  My HDL had not changed on the low fat diet or statins and stayed at 1.3 but is now an excellent 2.41.  My triglycerides were excellent before I started any treatment at 0.70 but deteriorated markedly on the low fat diet when they became raised to 1.6, but they are correcting on the high fat low carb diet and are now 0.81.   The creatine kinase level is coming down slowly.

After my first visit (after 3 months on the high fat low carb diet) Prof. Tim Noakes could see the improvement in my blood markers but was interested in my fasting glucose, fasting insulin, HbA1c, and CRP ultrasensitive.  His thesis was that my negative response to the ‘heart healthy low fat diet’ would suggest that I was carbohydrate intolerant and had become insulin resistant.  The results did indeed reveal that.   I believe that in taking out fat and adding more carbohydrates in following the ‘heart healthy low fat diet’ I was following the path to metabolic syndrome.  By the time I stopped the low fat diet I was overweight, my girth was in the danger zone, my triglycerides were raised, and I had elevated blood sugar and raised insulin.  Ironically, the ‘cure’ increased my risk of cardio vascular disease and diabetes. Statins are being prescribed to every other person with raised LDL cholesterol and are sold as having little if indeed no risk.  In fact on the fda.gov website under “FDA expands advice on statin risks” they advise that “People being treated with statins may have an increased risk of raised blood sugar levels and the development of Type 2 diabetes”. http://www.fda.gov/ForConsumers/ConsumerUpdates/ucm293330.htm

My raised blood sugar and insulin levels may be a result of statins as they warn, or they may have been caused by the low fat diet, or both. In my case I suggest that an excess of carbohydrates and decrease of fats would have played havoc with my blood sugar.  In a statin trial I read people were on a low fat diet.  They may have been blind to the fact that the low fat high carb diet would have contributed to diabetes, but perhaps not as risk of diabetes increased with statins no matter the dose or duration of statin medication.

This video on the findings on statins with Harvard’s Prof. J. Manson (Women’s Health initiative) with commentary by Dr Mike Eades is worth listening to.

I am extremely grateful to Professor Tim Noakes for revealing that I am insulin resistant and for pointing me in a dietary direction that will prevent my condition from deteriorating.  He advises that I need to increase my fat intake and decrease carbohydrates further.  There was so much focus on LDL cholesterol that the dangerous problem of becoming pre-diabetic was overlooked.  He believes that if I had continued on the ‘heart healthy low fat diet’ I would have become diabetic and obese.

In Sweden Dr Annika Dahlqvist was sued in 2008 because she advocated what they call in Sweden the LCHF (low carb high fat) diet and she won her case.  The Swedes are educated and followed the debate closely.  As many as a quarter of Swedes follow the LCHF way of eating and the most popular website is that of a Swedish doctor and it is called www.dietdoctor.com.

There are videos of interviews with experts such as Dr Mary Vernon, and Dr Westman of Duke University on the site. Another site is that of Jimmy Moore which is www.livinlavidalowcarb.com with over 500 interviews with experts.  One can listen to the podcasts.  Gary Taubes in an investigative journalist and spent years researching whether there was any science behind the idea that saturated fats caused heart disease.  He found none. His book is Good Calories, Bad Calories and Why We Get Fat and What to Do About It.  When you look at the experts who live the low carb high fat life style what stands out is how thin and well they look.

The strict low carb diet is necessary for me now that I am pre-diabetic.  However, I found that the most balanced view of nutrition is that of the Weston A. Price foundation.  It is based on the findings of a dentist called Weston A. Price who studied dozens of primitive peoples in the 1930s and examined their good health and subsequent deterioration when they replaced their natural and varied diets with modern industrial foods.  They all ate nutrient dense foods many full of the cholesterol and animal fats we are advised to cut out.  He found that with the replacement of traditional foods with modern industrial foods, the skeleton is not properly laid down and the middle third of the face too narrow with crowded teeth as is apparent in most modern faces.  The images of happy, robust, good-looking healthy ‘primitive’ peoples in the text speak a thousand words.  The book is called “Nutrition and Physical Degeneration” and the link is below.  Tim Noakes believes it is one of the most important books ever written.

My experience around diet has taken me on a fascinating journey of great interest!  I believe that we are doing great damage to our children by the nearly uniform removal of animal fats from so many products, and the free pass given to sugar, refined carbohydrates and industrial oils.  Please let our society embrace eggs, full cream milk, organ meats, fat on meats, cheese, full cream yoghurts and turn our backs on sugars and refined carbohydrates and industrial oils, and unhealthy grains like soya that have been sold as healthy.  When you give parents low fat diets the children eat as the parents do.  For our families we need to eat whole, nutrient dense, unprocessed foods with their fat content intact.  Our children depend on it.

I attach a spread sheet of my blood markers across the different diets and on statins.  Tim Noakes comments are in the last column.  I have copied Dr X and Prof. Tim Noakes. 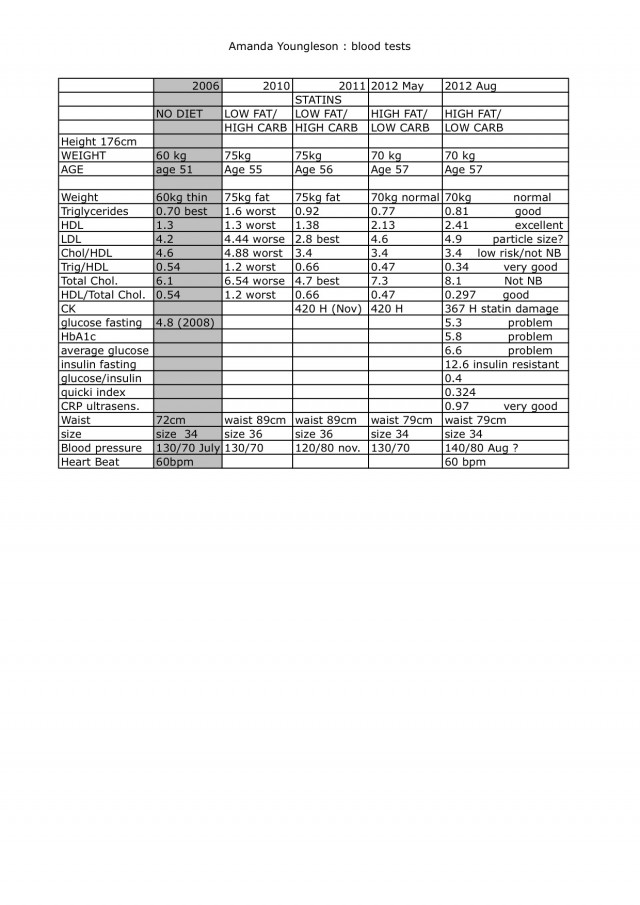 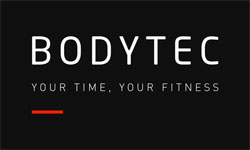 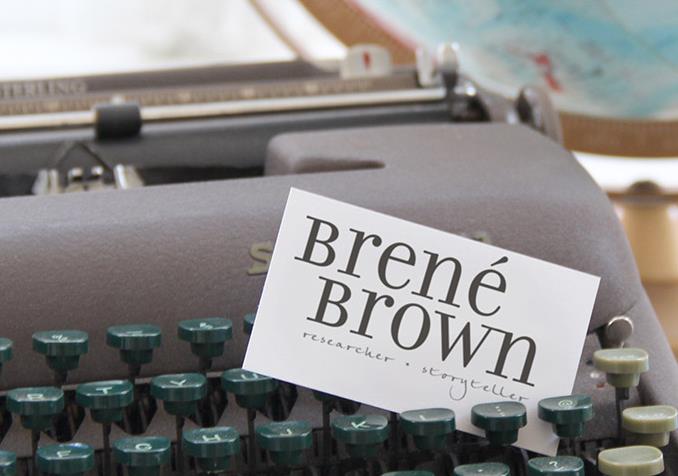